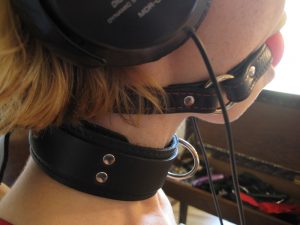 While silence can sometimes be a powerful tool during a scene, it can be fun, creative and very atmospheric to use music to set the scene when preparing for a session.

Not sure what to choose? Remember to pick something that’s consistent in rhythm – it can be jarring if something swaps from slow to fast, and can really break the mood in the scene!

Also, try to bear in mind the overall tempo. A slow scene that’s intended to drag on for a long time will be better with lower BPM albums, while intense scenes could benefit from faster music. And remember, don’t make it too loud! Unless you’re deliberately trying to stop your sub from hearing what’s going on …. 😉

If you prefer, you can go for something more traditional, like one of these albums and songs that come highly praised for scene-setting from around the web. Click through to see more recommendations.

The clock in Lord Vetinari’s anteroom didn’t tick right. Sometimes the tick was just a fraction late, sometimes the tock was early. Occasionally, one or the other didn’t happen at all. This wasn’t really noticeable until you’d been in there for five minutes, by which time small but significant parts of the brain were going crazy.