Have a peek at our newest clip, Topless Thong Beatdown… 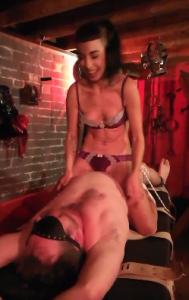 We do have a lot of fun down at The Serpent Rooms, it can’t be denied.

This weekend, we saw some plenty of delicious, agonising tickle torture sessions, where our willing slaves were dragged to within an inch of madness before being brought back over and over again – just look at this double session between Mistress Pip and Mistress Kali!

And even though The Serpent Rooms likes to make sure all its guests are very well taken care of, we also like to give a taste of to those who can’t be there in person, so they know just what they’re missing, over on our House of Serpent clip store…

As it’s nearly Christmas, and we’re in such a good mood after our weekend of depravity, we thought we’d treat you all to a preview of our latest clip-for-download from House of Serpent, Topless Thong Beatdown.

In this clip, Mistress Pussy Willow is rather displeased with Andy. It seems that Andy owes her some money and she has arranged to meet with him to recover the debt.

She is initially surprised that he bothered to show up, although if he hadn’t she makes it clear that she would have simply gone round to his house with a few of her “friends”. But he’s here and unfortunately, he still hasn’t brought any money with him.

So she vents her anger by giving him a good kicking instead. At least she believes that will make her feel better. Pussy Willow is topless and wears a black thong while she delivers a barrage of hard punches and kicks on her now ex-friend.

At the end, and as a final humiliation, she gets him into a sleeper hold and puts him to sleep, before leaving him on the mats and exiting the room.